Zion Lutheran Church celebrated its 100th anniversary on September 17, 2017. The year also corresponds with 500th anniversary of the Reformation on October 31, 2017.  Our theme included Luther’s Rose in the center of a cross with the letters “VDMA” in each corner. 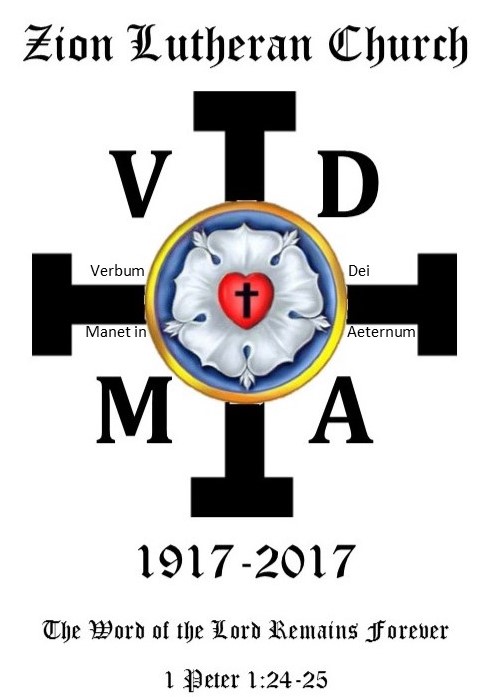 The cross is the center of our Christian faith as we proclaim Jesus Christ and Him crucified (1 Corinthians 2:2).

Luther’s Rose is a long standing symbol of Lutheranism. The black cross in the center reminds us that Jesus died to take the punishment for our sins. The red heart reminds us of the love God has for us in sending Jesus to be our Savior. The red of the heart is the color of the blood of Christ, shed for us and for our salvation. The white rose helps us remember the work of the Holy Spirit who make us pure and holy in God’s sight by bringing us to faith in Jesus and by helping us to live our lives for Him. The sky blue background pictures the joy of the new life God gives to all who believe and trust in Him. Finally, the golden ring outlining the seal reminds us of our eternal inheritance – a home in heaven where we will enjoy complete joy and happiness in our Savior’s presence.

The letters stand for the Latin motto Verbum Domini Manet in Aeternum, or in English, “The Word of the Lord Endures Forever.” This is the motto of the Lutheran Reformation, a confident expression of the enduring power and authority of God’s Word. The motto is based on Isaiah 40:6-8 quoted by 1 Peter 1:24-25. It first appeared in the court of Frederick the Wise in 1522. He had it sewn onto the right sleeve of the court’s official clothing, which was worn by prince and servant alike. It was used by Frederick’s successors, his brother John the Steadfast, and his nephew John Frederick the Magnanimous. It became the official motto of the Smalcaldic League and was used on flags, banners, swords, and uniforms as a symbol of the unity of the Lutheran laity who struggled to defend their beliefs, communities, families and lives against those who were intent on destroying them. (From Concordia: The Lutheran Confessions, A Reader’s Edition).