Zion Lutheran Church is a liturgical and confessional Lutheran church in Nampa, Idaho and part of the Lutheran Church-Missouri Synod. We believe, teach and confess that the Bible is the inspired and inerant Word of God, and that it is the source and norm of our faith.  We are "confessional" because we believe that the Lutheran Confessions are the correct interpretation and presentation of the Bible. Contained in The Book of Concord: The Confessions of the Evangelical Lutheran Church  are documents which Christians from the fourth to the 16th century A.D. explained what they believed and taught on the basis of the Holy Scriptures. It includes, firstly, the three creeds which originated in the ancient church, the Apostles' Creed, the Nicene Creed, and the Athanasian Creed. It contains, secondly, the Reformation era writings of the Augsburg Confession, the Apology of the Augsburg Confession, the Smalcald Articles, the Treatise on the Power and Primacy of the Pope, Luther's Small and Large Catechisms, and the Formula of Concord. 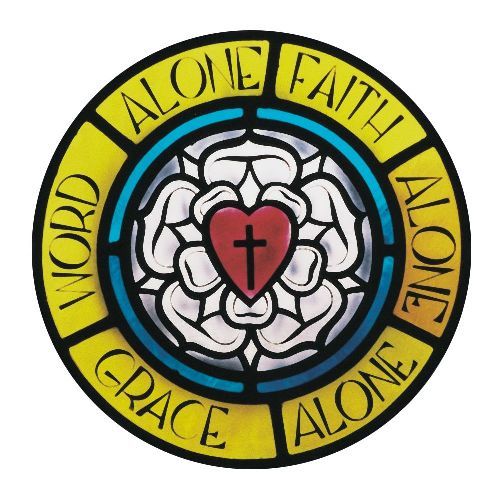 As part of the historic Christian Church, we continue to express the 5 solae of the Reformation, namely that:

We are saved by grace alone (sola gratia)

according to Scripture alone (sola scriptura)

to the glory of God alone (soli Deo gloria)

For information on our beliefs, please click the links below.

The Book of Concord

The Augsburg Confession (1530)
Chief Articles of Faith
Article I: Of God.
1] Our Churches, with common consent, do teach that the decree of the Council of Nicaea concerning the Unity of the Divine Essence and concerning the Three Persons, is true and to be believed without any doubting; 2] that is to say, there is one Divine Essence which is called and which is God: eternal, without body, without parts, of infinite power, wisdom, and goodness, the Maker and Preserver of all things, visible and invisible; and 3] yet there are three Persons, of the same essence and power, who also are coeternal, the Father, the Son, and the Holy Ghost. And the term "person" 4] they use as the Fathers have used it, to signify, not a part or quality in another, but that which subsists of itself.
5] They condemn all heresies which have sprung up against this article, as the Manichaeans, who assumed two principles, one Good and the other Evil: also the Valentinians, Arians, Eunomians, Mohammedans, and all such. 6] They condemn also the Samosatenes, old and new, who, contending that there is but one Person, sophistically and impiously argue that the Word and the Holy Ghost are not distinct Persons, but that "Word" signifies a spoken word, and "Spirit" signifies motion created in things.
Article II: Of Original Sin.
1] Also they teach that since the fall of Adam all men begotten in the natural way are born with sin, that is, without the fear of God, without trust in God, and with 2] concupiscence; and that this disease, or vice of origin, is truly sin, even now condemning and bringing eternal death upon those not born again through Baptism and the Holy Ghost.
3] They condemn the Pelagians and others who deny that original depravity is sin, and who, to obscure the glory of Christ's merit and benefits, argue that man can be justified before God by his own strength and reason.
Article III: Of the Son of God.
1] Also they teach that the Word, that is, the Son of God, did assume the human nature in 2] the womb of the blessed Virgin Mary, so that there are two natures, the divine and the human, inseparably enjoined in one Person, one Christ, true God and true man, who was born of the Virgin Mary, truly suffered, was crucified, dead, and 3] buried, that He might reconcile the Father unto us, and be a sacrifice, not only for original guilt, but also for all actual sins of men.
4] He also descended into hell, and truly rose again the third day; afterward He ascended into heaven that He might sit on the right hand of the Father, and forever reign and have dominion over all creatures, and sanctify 5] them that believe in Him, by sending the Holy Ghost into their hearts, to rule, comfort, and quicken them, and to defend them against the devil and the power of sin.
6] The same Christ shall openly come again to judge the quick and the dead, etc., according to the Apostles' Creed.

Article IV: Of Justification.
1] Also they teach that men cannot be justified before God by their own strength, merits, or works, but are freely justified for 2] Christ's sake, through faith, when they believe that they are received into favor, and that their sins are forgiven for Christ's sake, who, by His death, has made satisfaction for our sins. 3] This faith God imputes for righteousness in His sight. Rom. 3 and 4.

Article V: Of the Ministry.
1] That we may obtain this faith, the Ministry of Teaching the Gospel and administering the Sacraments was instituted. For through the Word and Sacraments, as through instruments, 2]the Holy Ghost is given, who works faith; where and when it pleases God, in them that hear 3]the Gospel, to wit, that God, not for our own merits, but for Christ's sake, justifies those who believe that they are received into grace for Christ's sake.
4] They condemn the Anabaptists and others who think that the Holy Ghost comes to men without the external Word, through their own preparations and works.
Article VI: Of New Obedience.
1] Also they teach that this faith is bound to bring forth good fruits, and that it is necessary to do good works commanded by God, because of God's will, but that we should not rely on those works to merit justification 2] before God. For remission of sins and justification is apprehended by faith, as also the voice of Christ attests: When ye shall have done all these things, say: We are unprofitable servants. Luke 17:10. The same is also taught by 3] the Fathers. For Ambrose says: It is ordained of God that he who believes in Christ is saved, freely receiving remission of sins, without works, by faith alone.

Article VII: Of the Church.
1] Also they teach that one holy Church is to continue forever. The Church is the congregation of saints, in which the Gospel is rightly taught and the Sacraments are rightly administered.
2] And to the true unity of the Church it is enough to agree concerning the doctrine of the Gospel and 3] the administration of the Sacraments. Nor is it necessary that human traditions, that is, rites or ceremonies, instituted by men, should be everywhere alike. 4] As Paul says: One faith, one Baptism, one God and Father of all, etc. Eph. 4:5-6.

Article VIII: What the Church Is.
1] Although the Church properly is the congregation of saints and true believers, nevertheless, since in this life many hypocrites and evil persons are mingled therewith, it is lawful to use Sacraments administered by evil men, according to the saying of Christ: The Scribes and 2] the Pharisees sit in Moses' seat, etc. Matt. 23:2. Both the Sacraments and Word are effectual by reason of the institution and commandment of Christ, notwithstanding they be administered by evil men.
3] They condemn the Donatists, and such like, who denied it to be lawful to use the ministry of evil men in the Church, and who thought the ministry of evil men to be unprofitable and of none effect.
Article IX: Of Baptism.
1] Of Baptism they teach that it is necessary 2] to salvation, and that through Baptism is offered the grace of God, and that children are to be baptized who, being offered to God through Baptism are received into God's grace.
3] They condemn the Anabaptists, who reject the baptism of children, and say that children are saved without Baptism.

Article XI: Of Confession.
1] Of Confession they teach that Private Absolution ought to be retained in the churches, although in confession 2] an enumeration of all sins is not necessary. For it is impossible according to the Psalm: Who can understand his errors? Ps. 19:12.
Article XII: Of Repentance.
1] Of Repentance they teach that for those who have fallen after Baptism there is remission of sins whenever they are converted 2] and that the Church ought to impart absolution to those thus returning to repentance. Now, repentance consists properly of these 3] two parts: One is contrition, that is, 4] terrors smiting the conscience through the knowledge of sin; the other is faith, which is born of 5] the Gospel, or of absolution, and believes that for Christ's sake, sins are forgiven, comforts 6] the conscience, and delivers it from terrors. Then good works are bound to follow, which are the fruits of repentance.
7] They condemn the Anabaptists, who deny that those once justified can lose the Holy Ghost. Also those who contend that some may attain to such 8] perfection in this life that they cannot sin.
9] The Novatians also are condemned, who would not absolve such as had fallen after Baptism, though they returned to repentance.
10] They also are rejected who do not teach that remission of sins comes through faith but command us to merit grace through satisfactions of our own.
Article XIII: Of the Use of the Sacraments.
1] Of the Use of the Sacraments they teach that the Sacraments were ordained, not only to be marks of profession among men, but rather to be signs and testimonies of the will of God 2]toward us, instituted to awaken and confirm faith in those who use them. Wherefore we must so use the Sacraments that faith be added to believe the promises which are offered and set forth through the Sacraments.
3] They therefore condemn those who teach that the Sacraments justify by the outward act, and who do not teach that, in the use of the Sacraments, faith which believes that sins are forgiven, is required.