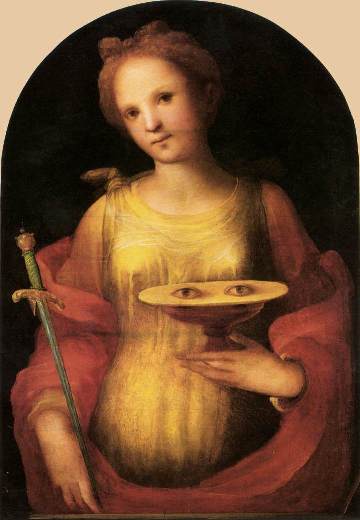 St. Lucy was born in Sicily in the year 283 AD. Her parents were very wealthy – in fact, they were members of the nobility. But Lucy’s father died when she was still very young, so she and her mother, Eutychia, were left alone. Eutychia taught and raised her daughter in the Christian faith, and Lucy was a devout and pious young woman. In fact, even though they still had much wealth, Lucy desired to devote her inheritance to the service of the poor. Her mother, though, didn’t think this was a good idea.

But then something happened that changed her mother’s mind. Eutychia had been suffering for several years from a chronic flow of blood. Lucy prayed for her mother’s healing, and her prayer was answered. The hemorrhage stopped, and her mother was restored to health. In response to this wonderful gift of healing from God, Eutychia allowed Lucy to have her wish and to distribute the vast majority of her share of the family wealth to the poor.

There was just one problem: Lucy had been betrothed to a young Roman man. What her mother did not know when this was arranged was that, like many of the early female martyrs, Lucy had consecrated her virginity to God, vowing that she would never marry so that she could devote her full attention to the service of the Lord.  This young Roman man not only was a pagan, but He actually loved Lucy’s riches more than he loved her. When she gave away her wealth, he was furious, and his greediness moved him to seek revenge. He went to the governor of Sicily and betrayed his fiancée, telling the governor that Lucy was a Christian. This was during the year AD 303, when Christianity was still illegal and Emperor Diocletian’s terrible persecution of the Church was taking place. All that someone had to do was denounce a person as a Christian publicly to the authorities, and that person would be arrested. It was a guilty until proven innocent situation. If the person didn’t deny or recant the faith by cursing Christ and offering incense to Caesar, he or she would be killed.

At 20 years old, Lucy refused to recant or deny her faith in Christ, even under this threat of death. Still refusing to deny Jesus, she was tortured and medieval legend has it (probably 15th c) that her eyes were gouged out. She was then unsuccessfully burned at the stake. Finally she was stabbed to death with a dagger. Her martyr’s death immediately made her famous in Sicily, and the story of her life and death, with some embellishments, lives on to this day.

If you look on the cover of your bulletin, you will see a painting of her from the middle ages, depicting her as a young woman dressed in a white gown, holding a golden platter with her eyes on it. Often times she is depicted holding a dagger or even with the dagger sticking out of her neck.

Particularly in Sweden, Lucy is still remembered by having one of the daughters of the house dress in a white robe with a crown of lighted candles and go singing from room to room early in the morning, while it is still dark, to awaken the other family members and to offer them St. Lucy’s Day buns. The tradition stems from the belief that Lucy once brought bread to needy people who were living in a cave. Even more, this gift also reminds us of Lucy’s faith that Jesus is the bread of life.

Other aspects of this tradition are also meaningful. The white baptismal robe is a reminder of her holiness and of the saints who have died in Christ, and indeed of all those buried with Christ in Baptism. St. Lucy’s, or our, holiness arises not from her own goodness, but through the commendation of the Lord in the washing and renewal of the Holy Spirit in the blood of Christ.

The crown of candles probably the most significant. You see, the name Lucy means light, coming from the Latin word lux, and because of that, festivals of light commemorating her became popular throughout Europe. Her commemoration date is on Dec 13, and until 1582 under the old Julian calendar, that date was also the winter solstice. St. Light celebrated on the day with the least amount of light, to focus on Jesus words, “I am the light of the world. Whoever follows me will not walk in darkness, but will have the light of life.”

Even when Lucy no longer had eyes, she still had the light of Christ by which to walk. She could yet “see” by faith, far better than any of her persecutors could see. Though physically blind, she had better vision than any unbeliever, for she was enlightened with the gifts of the Holy Spirit. The candles worn as a crown are a reminder of the crown of glory that all believers shall inherit through Christ in heaven. Though her life in this world ended in darkness and death, her eternal existence is one of light and life, even as it is for all the faithful.

St. Lucy bore witness to that fact in her life and in her death. In giving away much of her wealth to help the poor, she bore witness to the love of Christ, who, though he was rich, yet for our sakes became poor, that we through his poverty might become rich. She bore witness to a belief in God as the Creator who can and will provide for all of our daily needs. Her virginity was a sign of her devotion and the righteousness she had through faith in Christ. She testified that she loved the Lord and His salvation even more than life itself in this world. And in death Lucy bore witness to the Christ who has conquered death itself.

So it is also for you, especially in this Advent tide as you set your hearts on the coming of the Lord.  As we approach the darkest day of the year, we look to the Light of the World, the light that no darkness can overcome. Not the darkness of your sin, not the darkness of the devil, and not the darkness of this sinful and fallen world. You may not be called to be a martyr, but you are given to bear witness to Christ as the Light of the world, and you are surrounded by a great cloud of witnesses – prophets and apostles, saints and martyrs. And above all, the One who is the Light of the World, the light that no darkness can overcome. For you have been betrothed to Him, you have been dressed for the occasion in Christ’s righteousness, presented as a pure virgin to Christ as part of His holy Bride, the Church. What is now for us only a candle in the darkness will soon be the dawning of the everlasting day of resurrection at Jesus’ return. Let that joy set before you give you endurance in the faith – just as it gave endurance to St. Lucy.

O Almighty God, by whose grace and power Your holy martyr Lucy triumphed over suffering and remained ever faithful unto death, grant us, who now remember her with thanksgiving, to be so true in our witness to You in this world that we may receive with her new eyes without tears and the crown of light and life