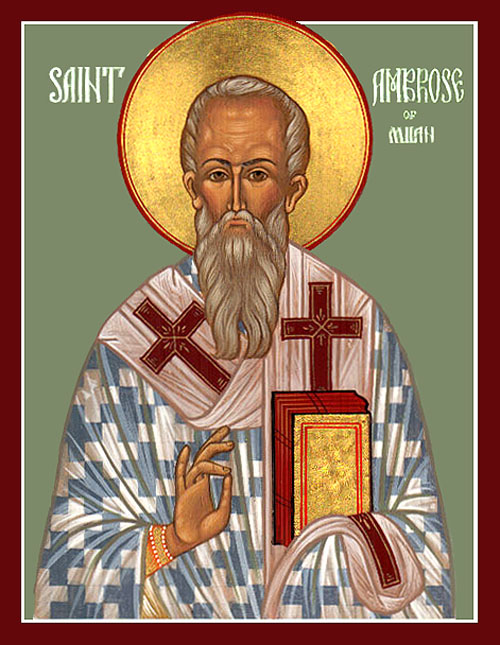 “When in Rome, do as the Romans do.”  There’s a phrase most of us have heard.  Guess what? This actually came from a resolution to a controversy over proper observance in the Christian church.  And the guy who first said it was none other than Ambrose, Bishop of Milan.

Ambrose was born in Trier, Germany in A.D. 340. At that time, this part of Germany was in one of the four large administration areas, called Prefectures, set up by the Roman Emperor Constantine in 337.  His dad was a Praetorium Prefect of the Praetorium Prefecture of Gaul. In other words, Ambrose’s dad was one of the four top officers of the entire Roman Empire.  Trier was the capital city of the Prefecture, and in fact was an imperial residence in the Western Roman Empire and a functional capital city of the Western Roman Empire rather than Rome.

Because of the position of his father, Ambrose was sent to Rome for his education. He rose quickly through the government and political ranks to become the governor of the area of Milan.  A couple years afterward, in the year 374, the Christian bishop of the area died.  This bishop, Auxentius, was an Arian Christian (remember those heretics who St. Nicholas taught against and who said that Jesus was a created being and not equal to God the Father and who the Council of Nicaea rejected).  These Arians still held a lot of sway in the Roman Empire and the debate wasn’t fully settled even after Nicaea almost 50 years earlier).  A great uproar ensued over whether the next bishop of the area would be an Arian Christian or a Trinitarian Christian, and so as the governor of the area, Ambrose intervened to try to calm things down a bit.  As he was giving a public speech to that end, someone yelled out, “Ambrose, bishop!” Ambrose then ran away, but guy who hid him from the crowds later turned him in because he got a letter from the Roman Emperor saying it would all be ok.

There was just a little problem. You see, Ambrose wasn’t a pastor, he wasn’t trained in the faith, and he wasn’t even baptized, even though he was a catechumen. So, a week later, the 34-year-old Ambrose was baptized in name of the Father and of the Son and of the Holy Spirit on December 7, which is the day we commemorate him.  Shortly afterward, he was ordained and made bishop of Milan.  Talk about the fast track into the Office of the Ministry!

So now Ambrose, son of one of the most powerful men in the Empire, former governor, was made a bishop of Milan, which had become the official Western capital of the Roman Empire 80 years earlier by the Emperor Diocletian.  One of the first things that Ambrose does is he gets a hold of the most prestigious professor in the world at the time, a guy name Augustine, yes that St. Augustine, who went to hear Ambrose to study the way he preached, and seven years later baptized by Ambrose himself. Supposedly, he composed the Te Deum that we still use in the Daily Office of Matins, on the occasion of Augustine’s baptism.

It came to be that during some of the controversies of the day, there arose a question about which days were the best to fast. So Augustine writes his friend and mentor, Ambrose, on what to do.  So Ambrose writes to Augustine: "When I'm in Rome I fast on Saturdays (the local Roman custom) and when I'm in Milan I don't. Follow the custom where you are."  This has come down to us in English, as “When in Rome, do as the Romans do.”

So what does this have to do with much of anything? Well, actually it has to do with a lot.  You see, during the Reformation, as still happens today, people tend to go to one of two extremes: either making the way you worship into a hard and fast law that has to be exactly the same everywhere at all times; or thinking that the way you worship doesn’t really matter, that Christian freedom allows us to do whatever we want when we want, to believe what we want whenever we want.  “When in Rome…” becomes an excuse to turn the Gospel into the Law. But this is not what Ambrose meant.  In matters of humanly devised tradition and custom, sure, follow the tradition of where you are. But in matter of the Gospel, there is no compromise.

There is no changing things when it comes to the Word of God.  For as Christians, we do as Christ does, and as He bids. This Ambrose knew full well, as did the Lutheran Reformers, and the Lutherans who came over to the United States over 150 years ago.  The Christian faith is not situational, it is not changeable, it is not do as you’d like with it.  The Gospel is not novel, it does not need to be dressed up or made new to reach new.  It is the eternal Gospel, the eternal Good News that sins are forgiven for the sake of the Son of God who died on the cross, and whose coming we eagerly await. For Jesus is the same yesterday, today and forever.

That eternal Gospel is what Ambrose strove the rest of his life to proclaim. The Good News that Jesus, the true Son of God, came down from heaven, was incarnate of the Holy Spirit by the virgin Mary, was made man, suffered and died for the sins of the world, that He was raised three days later to live forever.  This is the source of our salvation.  We see this so clearly in probably the best known hymn that he composed, “Savior of the Nations Come.”  Listen again to verses 5-6, “God the Father was His source, Back to God He ran His course. Into hell His road went down, Back then to His throne and crown.  For You are the Father’s Son Who in flesh the vict’ry won. By Your mighty pow’r make whole All our ills of flesh and soul.”

Throughout his life as a bishop, Ambrose was strong defender of the faith, a fierce opponent against heresy, paganism, and hypocrisy, and he convinced two Roman Emperors to publicly opposed Arianism and affirm the divinity of Jesus.  Ambrose was one of the four great Latin Doctors of the Church (with Augustine, Jerome, and Gregory the Great). His name is also associated with Ambrosian Chant, the style of chanting the ancient liturgy that took hold in the province of Milan.

St. Ambrose died on Good Friday, April 4, 397. God takes an unsuspecting man and uses him to spread the Gospel of Jesus Christ. Isn’t this just how God works? He takes people, unsuspecting, unprepared, unholy, and with water and the Word His Triune Name is placed upon and them and they are placed into the priesthood of all believers. Preparing them to speak the Gospel to those around them. Pointing to Jesus throughout life, and even past death. Ambrose’s body is still buried in the crypt beneath the cathedral in Milan, you can notice that one of his eyes is lower in his head than the other. And he was a SHORT fellow, imperfect, sinful yet big in character, pointing to a bigger and better God.

This is why Ambrose is still remembered, his hymns are still sung, his writings are still read: they point people to the triune God – Father, Son and Holy Spirit.  To the coming Savior of the nations. To the forgiveness of sins that is yours in Christ.